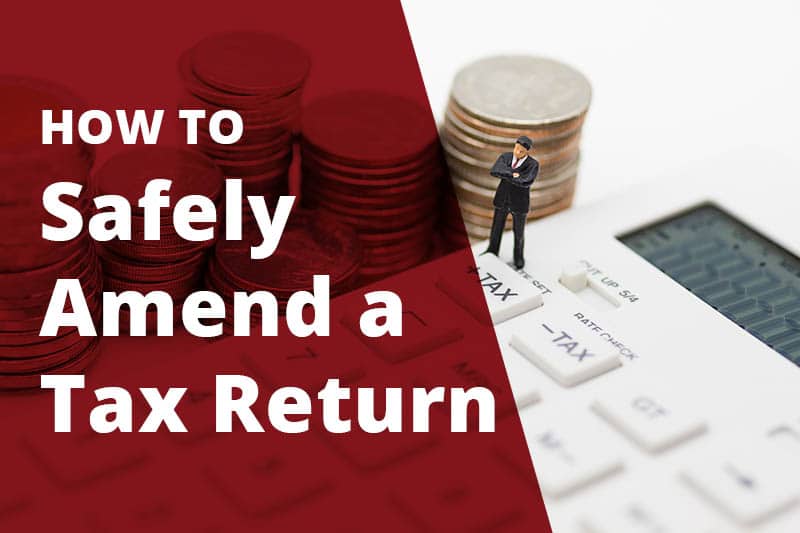 You have probably heard that a tax return can be changed (amended) if there is a benefit to do so.  Many taxpayers believe, however, that this could raise a red flag with the Internal Revenue Service (IRS).  And, of course, no one wants to get on their bad side. In this article, we will discuss how to safely amend a tax return.

How to Safely Amend a Tax Return

Amending (changing) a tax return is actually a pretty straightforward process. According to the instructions provided by the IRS, a taxpayer is allowed to amend a prior year tax return for the following reasons:

Needless to say, by far the most common reason to amend a return is item (1) above.

Beyond that, simply filling out a Form 1040X for an individual tax return (corporations and partnerships have their own forms—we will stick to individual for purposes of this discussion) and preparing the appropriate forms of the original return for the changes being made and mailing them (along with a copy of the original return as previously filed) is all that is required. Form 1040X does require an explanation of the reason for the amended return, but as long as it falls under the categories listed above, it should be quite safe and acceptable.

A taxpayer owns a small business in which they use a vehicle 100% for business purposes. The previous tax preparer chose to take this deduction as an employee business expense that is reported as an itemized deduction on the taxpayer’s Form 1040 Schedule A. This is legal and is technically not an error.  It is also probably not the most advantageous way to deduct this vehicle. The taxpayer reports their business income and expenses on Form 1040 Schedule C. Because of this, they are subject to income tax on the profit of the business and an additional (approximately) 15% self-employment tax on that profit.

The new accountant looks at this same scenario for the next year and determines that the best (and legal) way to deduct this vehicle is as a business deduction on Schedule C. The benefit is not so much in the total income tax but in the savings on the self-employment tax. Reporting it on Schedule A does not reduce the income taxed as self-employment income, reporting it on Schedule C does. Since it was good enough to treat it that way this year, it’s good enough for last year since it is the same transaction.

By amending the prior year tax return for this change, the new accountant was able to get the taxpayer a refund of approximately $2,500.00 at a cost of $150.00 to amend the return (by the way, the cost was offset by the interest the IRS had to pay back to the taxpayer for the use of their funds since the prior return was filed).

Is Amending a Tax Return Safe and Legal?

Amending a return in and of itself does not normally raise a red flag with the IRS. The nature of the transaction might. The transaction referred to above is one that is incurred in the normal course of running a trade or business. In either year, it might come under scrutiny because automobile deductions tend to draw a little more attention.

As long as the taxpayer has properly documented the business usage of the vehicle in both years it is a perfectly legitimate deduction and this treatment is both safe and legal. On the other hand, if a taxpayer wants to amend a return for unreasonable, frivolous, or fraudulent reasons, then this would not be the case and any competent professional such as a Certified Public Accountant or Enrolled Agent would and should decline to do so.

Responding to a Tax Notice

A taxpayer gets a notice from the IRS saying that a Form 1099 was received by them but the amount of income shown on it was not included on the tax return that was filed for that year. This is a common occurrence. As a result, the IRS assessed late payment penalties and interest of about $1,800.00. The taxpayer had forgotten to give their copy of the document to the tax preparer.

The new accountant noticed that the same problem existed in the next year but the IRS had not found it yet, even though the return had already been filed (don’t worry they will).

The new accountant also noticed that the missing income was not taxable in either year, but it is not the IRS’s responsibility to recognize this. It is the responsibility of the taxpayer. As a result, the new accountant was able to amend both returns and included the missing information, showing that it was non-taxable in both cases. This corrected the information the IRS was missing and saved the taxpayer the $1,800.00 from the tax notice and avoided the same problem happening in the following year.

When Can a Tax Return Be Amended?

There is a time limit on amending a return. In general, if you are trying to get a refund or take a credit, you have until three years (including extensions) after the initial return was filed or within two years of when the actual tax was paid, whichever is later.

A Tax Professional Can Help

Having a Certified Public Accountant or Enrolled Agent look over a previously filed tax return can sometimes result in a tax savings, as we have seen. Look for a professional who is knowledgeable and aggressive in tax matters but who will not cross the line.

And should a question arise with the IRS due to amending a return, make sure that the professional is authorized to represent you before the IRS (never do that yourself). The IRS only recognizes Certified Public Accountants, Enrolled Agents, or Attorneys—all of whom must have a Form 2848, Power of Attorney, and Declaration of Representative signed by the taxpayer—to do this.

Larry Bertsch, a long-time resident of Las Vegas, former CFO and former bankruptcy trustee with a well-respected reputation in both the private and public sectors. He is the founder of Larry L. Bertsch, CPA & Associates, a top certified public accountants firm that has been offering the highest quality services to regional clients since 2003. Mr. Bertsch served as a panel Trustee for United States Bankruptcy Court for the District of Nevada between 1991 and 2000. He has made it the highest priority to use his experience in finances and management to give small businesses the services they deserve.